Marty-Stu bathes in a lake of blood 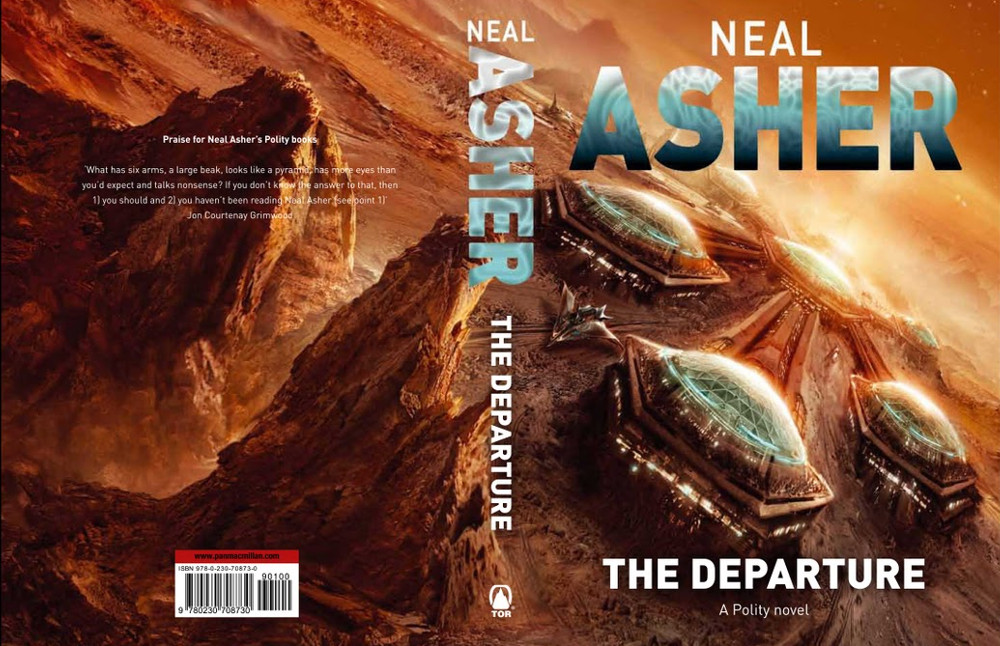 Sometimes you encounter a book so bad — so morally idiotic and so artistically inept — you have to check yourself: maybe it's not the book that's at fault, but the reader.

Or maybe not. Sometimes a novel really is that bad, and the real mystery is not that its publisher deemed it commercially viable, but that the publisher was right.

Neal Asher's The Departure is one such, ostensibly a novel of ideas wrapped in the form of a science fiction thriller that is in fact — after this reviewer took his reality 8-count — a celebration of slaughter, blood-porn with a side-order of military technophilia.

As one, they swung round, facing along the corridor, rifles up against their shoulders. Lopomac went down on one knee, but Var remained standing. She opened up on full automatic, whilst Lopomac fired in short bursts. The lead enforcer was slammed back by Silberman, but the spray of blood and escaping vapour showed that his body had not been sufficient protection, for the bullets had gone straight through him and struck Silberman too. One of the enforcers behind spun against the wall, smearing bits of himself across it, steaming like raw meat dropped onto a hot stove.

Steaming like raw meat dropped onto a hot stove. Oh, yeah, baby! Give me more! Unfortunately, that's probably the best of the book's similes. But I digress.

There is a story here, of sorts, but one so repetitive the book could have easily shed three quarters of its 500 pages without any harm to the plot. Nor is it redeemed by credible characters or ingenious world-building.

Asher's 22nd century is a not-unfamiliar nightmare world: over-crowded, slowly starving and running out of natural resources, it is ruled over by a brutal and incompetent world government that is not-so slowly but very surely overseeing the end of civilization. As the starving masses are rounded up for eventual extermination, humanity's toe-holds in space is being shuttered as well. Colonies in the asteroids are being moth-balled and the base on Mars has been left to its own devices.

We learn this through a series of author-omniscient info-dumps and occasional bits of dialogue. And, further, we learn that it is all our own fault. Over the century and a bit between our now and the book's then, humanity gave up its freedom, bit by bit, to a central authority in the name of security, etc. By novel's opening it is just another dictatorship, with a ruler-for life at the top and an elite of scrabbling courtiers striving for status and power just below.

Not an especially original background for a science fiction novel, but dystopias have a long and honourable tradition in the field and variations on the theme can be welcome.

This dystopia, though, never feels any more real than the so-called characters who inhabit it. For a fairly long novel, with sections set on Earth, on Mars and a super-satellite that would have made E.E. "Doc" Smith proud, The Departure consists mostly of a claustrophobic series of battles. Or rather, of mass slaughters.

Our hero is Alan Saul, possibly the greatest genius the human race has ever known. Saul has been subjected to brutal tortures, then left for dead. But he has an artificial intelligence implanted in his brain and, with its help, he escapes to plot his revenge. Lucky for him, he's not only an all-purpose genius but a master of military strategy, tactics and combat in all its forms.

Yes, Alan Saul really is all that, the whole Marty-Stu: Smart, strong, disciplined and half-way through the transition from homo sap to homo superior.

If The Departure sounds like a bildungsroman for a man on the cusp of becoming Humanity 2.0, forget it. It might have been Asher's intention, but the idea is drowned in a space-station full of blood and steaming meat.

Similarly, there is mystery in the book's skeleton. At first, Saul doesn't know who he is or why he had been tortured. But it is a mystery whose every clue is uncovered at the cost of lovingly (if not effectively) described carnage.

It is as if Asher learned all he knows about writing by playing first-person shooter video-games. Each step in the story involves another "level" to pass through, and another swath of (usually) nameless and (almost always) featureless antagonists to be torn, spindled and mutilated by the Smartest Man in the Universe.

Saul isn't working alone, though. Early on, he frees the surgeon who implanted the AI in his mind. Once Saul's lover, Hannah was kept prisoner by the Evil World Government, forced to conduct monstrous experiments upon human subjects, like Alan Saul himself.

But none of that matters. Hannah is no character, but only a device for giving and receiving ... info-dumps.

She dipped her head and stared at the floor, trying to dispel her doom-laden thoughts so that she could restore her mind to ts analytical best. She now looked up at Saul. 'He was our political director, so he must have taken whatever he wanted of my research and applied it to himself — whether with government permission or not, I don't know.' To Braddock, she now continued, 'He's the same type as Malden, but managed to outmanoeuvre Malden because he was well prepared, and because he's been running the hardware in his skull longer and knows better how to use it.

'What about him?' Braddock indicated Saul with a tilt of his chin.

What about him? Hannah wondered. Saul had obviously expected to come up here and snatch control of the station as easily as he had taken control of the cell complex, and if there had only been normal humans and computers for him to overcome, he would have had every chance of succeeding. But first, Malden had stood in his way, and now a comlife poisonous spider lurked at the heart of things. And just to add add to their woes, station security officers were now searching for them, so this little hideaway would not remain safe for much longer. Could Saul triumph over such odds? Was he strong enough yet? Gazing at him, she had to wonder just what was gong on behind those unreadable red eyes. She now spoke to try and boost her confidence.

'The hardware and software inside his skull is far in advance of that used by both Malden and Smith — his intelligence, too," she explained. 'He just hasn't had a chance to use it yet.'

'What, my intelligence?' Saul joked.

Hannah did not respond to this attempt at humour. It was dry and disconnected anyway, since Saul was somewhere else, his gaze directed overhead and his face expressionless. It almost seemed as if an empty mannikin sat in his place.

It's tempting to make this a review consisting of nothing but excerpts. Asher's dialogue is all like that, except when it is worse.

'I see,' said Ricard, 'that you now have entered Hydroponics, which is one of the most critical areas on this base. Doubtless you have also murdered my two men stationed there. Be assured that by threatening our food supply, you cannot hold the people of this base to ransom.'

That bit comes from the base on Mars, where Saul's sister (of all people) is leading a heroic revolt. I don't remember her name and won't bother looking it up. Suffice it to say that her story is considerably briefer — it could have been done away with entirely so far as this book is concerned; presumably she plays a larger role in the sequels — but follows a similar, blood-drenched, trajectory.

Speaking of that main, blood-drenched trajectory ...

Gunfire from automatic weapons racketed about within the hydroponics room. A soldier stumbled away from the paint-sprayer, orange from head to foot and blinded, then another robot pinned him back against a wall, while it tried to weld a non-existent join running from his neck to his groin. The one with the cutting disc casually sliced off someone else’s head, then turned to a smouldering corpse that had just been welded, and cut off its head too. The screams of agony were horrible, and usually quickly truncated. Within a minute they had ceased, as had the gunfire. Still, the robots continued with their allotted tasks until Saul instructed them to desist. Refinement was called for, and at the very thought he altered the programs, now specifying only one operation to be carried out per work task. No need for a robot to behead an electrocuted corpse.

All right, I'll stop, I'll stop! It's just that, after reading the whole thing, it's hard not to inflict share.

One could, I suppose, make a case that Asher's long battle scenes — all that detailed weaponry and all those shattered limbs and splattered brains and stinking viscera and bursting eyeballs — are meant to be a cautionary tale about the horrors of violence; that the robot soldiers and automatic weapons are earnest warnings about own all-too near future (as an essay he wrote about the series suggests), but the results on the page make his intentions irrelevant.