Not with a bang: Battlestar Galactica
ends with the mother of all cliches 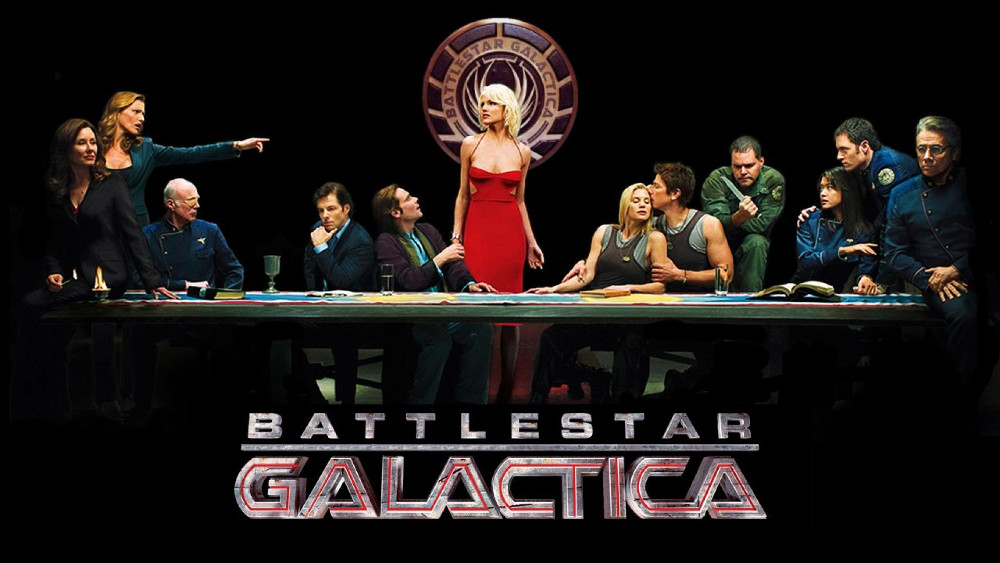 Giving oneself over to an episodic drama, produced over years, is always a gamble on the part of the reader or viewer. Unlike a novel or a feature film, the reader or viewer must take a leap of faith and trust that the creator or creators, essentially know what they are doing, that — even if they are open to making changes as things move along, organically evolving as they are surprised by their own creation — they at least have the ultimate end-point, the climax, always in view.

During its first two seasons, Battlestar Galactica showed every sign of being that rarity on commercial television, a show that was meant to be seen as an organic whole, with a begining, a middle and an end, rather than a series of adventures intended to go on (and on — see the eternal recurrence of Star Trek, for example) so long as it has enough viewers for advertisers to continue financing production.

The program was smart, funny and often brutal; it dealt with serious issues without recourse to easy (or sometimes any answers offered to the viewer as the "right" one. The show's characters — even the noblest — were realistically flawed and very far from the virtually ideal usually served up in television and filmed attempts at science fiction.

To say that I quickly became a fan is an understatement. In truth, Battlestar Galactica was, in my opinion, the best show on television, asking its audience to think as well as to feel. (Since then, I've encountered such programs as Deadwood and The Wire, the former sadly cancelled before it's time, but the latter allowed to go on until it was truly completed.)

To tell you the truth, I lost my faith that Ronald D. Moore knew where they were going with Battlestar Galactica at some point about mid-way through the third season, when the series began running what were basically "stand-alone" episodes typical of network dramas that did little or nothing to further the progress of the series' main story: I read reports at the time suggesting this was due to network interference, to bean-counters messing with the creators in hopes of expanding the show's audience, but Friday's final episode leaves me doubting that it was not, in fact, Moore who was responsible for the series' decline. Nevertheless, right up until the final episode, I had hope, if not faith, that he might surprise me, despite the apparent impossibility in pulling the program's myriad sub-plots and thematic threads into a well-realized whole.

Though I was sceptical about Moore's ability to pull it off, I didn't expect a dénoument that I can only characterize as, well, a cheat.

(Note: the following necessarily contains spoilers. Since I can't even recommend watching the episode, I don't think it matters, but stop reading now if you want to pass judgement yourself.)

In a nutshell, Battlestar Gallactica posits a society destroyed by its own creations, the Cylons. Cylons are robots who gained sentience and rebelled against their position as slaves; following a half-century of peace, the Cylons returned, destroying the Twelve Colonies with nuclear weapons, and leaving only 50,000 survivors out of the twelve planets. The series follows those survivors, who are both trying to escape from the Cylons, bent on finishing their extermination of the human race, and to find refuge on possibly mythical planet called "Earth".

Despite the fantastic, science fictional trappings, Battlestar Galactica managed to provide pointed, non-didactic commentary on current events, such as the invasion of Iraq, the use of torture and the complexities of democratic politics with a sophistication sometimes matching the best of serious fiction. Even better it made concrete such abstractions as compromise and second-thought (as well as power-mongering and corruption) in its presentation of politics.

At its best, the program explored ideas, posing questions rather than offering Answers.

Even more, Battlestar Galactica provided some of the most complex characterizations I've seen on American television. Despite the military trappings and the dramatic structure, there wasn't a major character on the program who didn't make major mistakes. There were no easy answers, even for essentially "good" men and women; at its best, the program was "about" the creative tensions between conflicting understandings of right and wrong, about the difficulties inherent in balancing power with morality, of choosing the "right" course of action in times of crisis.

But having now seen the final episode, the climax, I can only feel betrayed. It seems clear now that Moore either did not after all actually know where the story was going to end up or, perhaps worse, that he did.

For decades, books and articles on the writing of science fiction have included a list of ideas that have been done to death (if you'll forgive me the cliche), of cliches to avoid.

Much of the time, the very first cliched idea to avoid is the "Adam and Eve" story, in which a couple or perhaps a larger group of survivors of some calamity crash-land on a pristine planet, only for it to be revealed that — gosh! — they were our ancestors!

Proof that Battlestar Galactica succumbed to a failure of creative imagination is that its ending was the above-noted cliche.

And how did the fleet manage to find Earth in the end? Through multiple acts of deus ex machina, that's how.

Our protagonists' arrival on Earth, perhaps 50,000 years ago, is "explained" by angels. Yes, literally angels, representing a kind of medieval Divine Providence.

I won't bore you with the details; if you're a fan of the show you probably already know them and, if not, this review is unlikely to convince you to invest a close to a hundred hours of your time in order to find them out.

Suffice it to say the finale reveals that our "heroes" have been endlessly manipulated by divine intervention, as if the mental and imaginative lives of Moore are one with Homer's. The gods are hidden, but live among us, nudging us here and there, in hopes that someday we can escape the wheel of eternal recurrence.

The endlessly venal and self-serving Balthar, along with Caprica Six are revealed as some (unexplained) sort of divinities. Kara Thrace, once one of the most unusual and strong female characters ever portrayed on American television, herself turns out to be some kind of angel — literally, it is more than implied; she in fact very literally disappears into thin air — presumably taken bodily back to heaven — following the completion of her "mission" (leading the survivors to Earth).

Galactica has always included a paranormal or religious element, a mystery that we were implicitly promised would be explained. What we were given however, makes a vaguely-mystical hash of explanation, let alone of logic.

I suppose one can intuit an overriding rationale for the events presented in the final episode (and, by extension, in the series as a whole) but this reviewer, at least, has his doubts. The dénoument reeks of a failure of imagination, if not necessarily of courage.

Battlestar Galactica is a series which has included some of the best television writing I've seen come out of North America, but if one accepts the conceit that it is to be taken as a single work, as a single dramatic narrative, it must be judged an almost tragic failure.

If a success, it is the success of an essentially pagan vision, in which the Gods are with us always, inscrutable, mysterious, incomprehensible and apparently arbitrary but acting with a Purpose we are not given to understand.

Despite its technological trappings, in the end, Battlestar Galacticta turned out to a fantasy after all and, like most fantasies, it is essentially reactionary in philosophy, denying the existence of individual volition, of free will, in favour of mysterious Destiny, where reality is beyond even the hope of human understanding and where — despite the often-superb characterizations throughout the series — the individual human being is important only when he or she is a tool of that mysterious Destiny.

What a let-down. What a tragic waste of a lot of sometimes brilliant work.