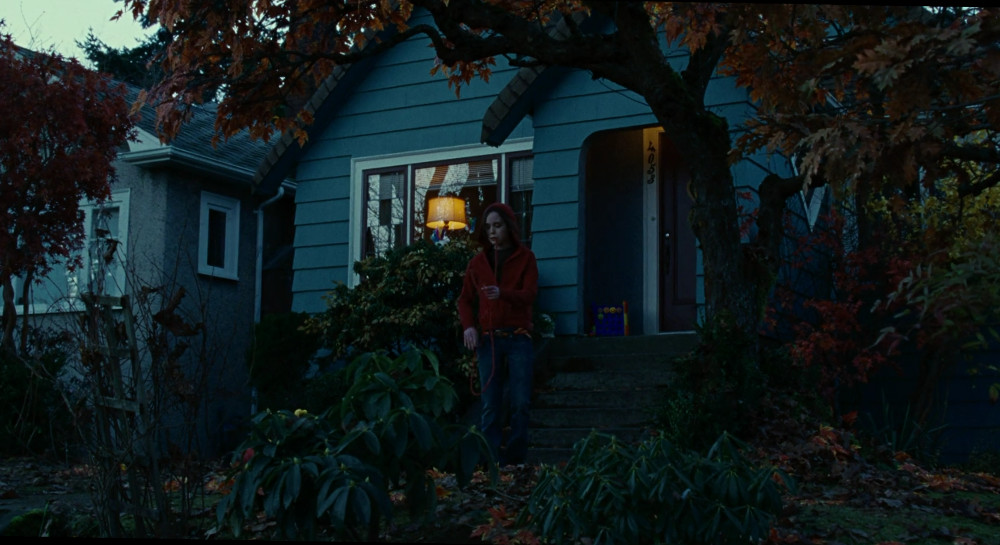 Juno opens with our titular heroine chugging from a gallon jug of orange juice while on her way to the local drug-store, where she proceeds to await the results of her third pregnancy test of the day in the company of a sarcastic clerk and a random customer.

Juno accepts the final verdict with a barely-credible aplomb and heads for home, fooling with a makeshift candy noose before going inside and calling her best friend Leah (Olivia Thirlby, excellent as the less mature but maybe more grounded side-kick). She decides she will abort the foetus and so informs the father the next morning, a scene in which both Page and Michael Cera as Paulie, are utterly convincing as frightened and vulnerable kids.

"Yeah, yeah, do whatever you think best," says Cera's Paulie, subtly radiating fear and confusion from beneath his facade of cool.

The decision not to abort after all, but to carry the foetus to term, is probably the movie's weakest point. The humour in Juno's interaction with the sole anti-abortion protester (who just happens to be a class-mate) and of her ultimate retreat from the clinic both seem forced. Fortunately, it is over quickly and without it there wouldn't be a movie — at least not this movie.

'Somebody else is going to find a precious blessing from Jesus in this garbage dump of a situation.'

Where you might expect a turgid morality tale or a dire warning about the perils of women's sexuality, this movie instead presents an eccentric but likable lead character who, in the best romantic comedy tradition, is mostly surrounded by an eccentric and likable supporting cast.

The scene in which Juno tells her father and step-mother (both characters ably underplayed by J.K. Simmons and Allison Janney, respectively) about her situation is played both for laughs and to show us that Juno's working-class family are no stereotypes. There is no yelling or screaming, just acceptance and parents who intend to stand by their "dummy" of a daughter no matter what.

From that point on, it's clear Diablo Cody's script isn't going to play down to a viewer's expectations.

What complications there are come courtesy of Juno's relationship with Mark and Vanessa (Jason Bateman and Jennifer Garner), whom she has chosen as the adoptive parents for her baby. Neither turns out to be the people Juno (or the viewer) first thought and it slowly becomes clear that their story will be nearly as important to us as Juno's own.

For a movie in which very little happens besides the slow growth of a foetus, Juno packs a large bundle of surprises, most of them having to do with what doesn't happen. Happily, even the romantic comedy's requisite happy ending works as a surprise and Cody doesn't cheat — the coda leaves us smiling but is open-ended enough to stay credible.

If there is a directly political or sociologically significant subtext to Juno, it is that individual choices matter and that it matters that individuals have choices. Juno's world is very much one in which a woman's control over herself is simply assumed. Juno consults her parents and Paulie about her choices and decisions but even at 16, no one really questions that they are her choices to make.

But to hell with subtexts. Juno is a romantic comedy about, and only about, a few individual characters who deal with a situation that would be a tragedy for many as merely "one of those things". If the viewer is meant to take away any lesson at all, it is probably only that life is full of solutions — and, maybe, that even a very young woman can and should take responsibility for her actions and live according to her values.

Comments from the original posting

I have watched the movie

I have watched the movie Juno. Ellen page had done a fantastic job in this one. But I they could have also explored a few more characters and tried to bring out a moral value to the movie. But, it was a good watch too. [Edit by Admin: irrelevent, spammy link deleted.]

Your reply burns a straw antagonist

It's anti-choice BS. Plain and simple.

The last time I checked, "choice" included the option not to abort.

Your link has nothing whatsoever to do with Juno. The character in the movie wasn't pregnant as a result of incestuous rape but of bad planning, of sex with someone she cared for a great deal.

It's not really relevant to the discussion of the film (though it's more relevant than your link), but in real life, some teenage girls actually do opt to carry to term rather than abort — I used to know someone who actually did it. (I know one hell of a lot more who aborted, but the point remains: what Juno did, is something that some people sometimes do.)

Comedy's in the mind of the beholder. I laughed, apparently you didn't. I can deal with that.

The romance? That's easier. Juno/Paulie, of course — that's the traditional element — but more surprising was her decision to stick to her deal with Vanessa, and never mind the fact Mark turned out to be nothing but a charming prick.

Juno is a romantic comedy

Juno is a romantic comedy about, and only about, a few individual characters who deal with a situation that would be a tragedy for many as merely "one of those things". If the viewer is meant to take away any lesson at all, it is probably only that life is full of solutions — and, maybe, that even a very young woman can and should take responsibility for her actions and live according to her values.

You mean like deciding that when life gives you lemons you should make lemonade?
http://open.salon.com/blog/rogerf1953/2010/07/08/daddy_knocked_me_up_lem...
It's anti-choice BS. Plain and simple.