Smokers of the world unite! You have nothing to lose but your jones(ing)!

Smokers of the world unite!

You have nothing to lose but your jones(ing)! 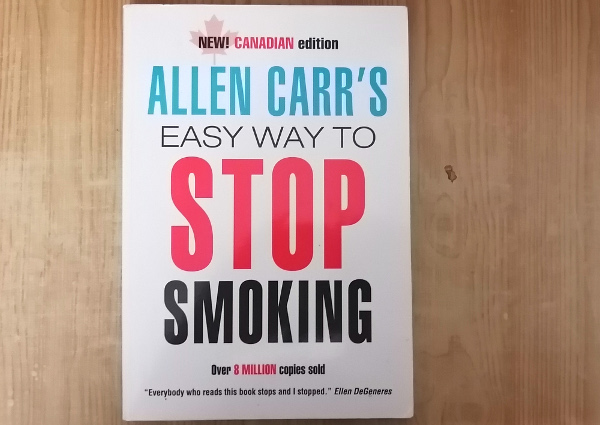 It worked for me! Your mileage may vary, of course.

At some point or another we've all heard the phrase, if something sounds too good to be true, it probably is, and most of us have probably used it.

"Easy" ways to make money, lose weight, find love, and cetera and cetera, are forever singing their syren songs from television adds, email spam and the self-help sections of bookstores, to name just a few.

So you can imagine my scepticism when a friend gave me his copy of Allen Carr's Easy Way to Stop Smoking. My friend told me he butted his final cigarette when he finished the book and he felt sure that I would do the same.

I've been smoking since I was 16 or 17 years old, very nearly as long as he and I have been friends and almost as long as he had been smoking — what did I have to lose? he asked me, and I had to agree to give it a try, no matter that I couldn't even imagine that quitting smoking could possible be "easy".

Well, it seems there's a reason the truism I mentioned at the outset includes the word, probably. Because I too butted my last cigarette at the precise moment I finished Allen Carr's remarkable book. Every once in a very long while, something that sounds too good to be true, actually is true.

Over the more than quarter century I've been smoking, I've quit quite a few times. All failures (up 'till now, I believe), my attempts at becoming smoke-free have lasted as long as two months (or almost — the lies a drug addict will tell himself and others are remarkable) and as briefly as five or 10 minutes. And every single one of those attempts was hard, a constant battle of Addiction versus Will (or "willpower", to use Carr's un-hyphenated term).

Whether quitting "cold turkey" (a term Carr correctly notes is inappropriately lifted from the much more physically debilitating symptoms of heroin withdrawal) or using nicotine gum or the patch, my previous tries have left me pretty miserable, and forever craving a cigarette so that, when temptation or pressure showed up, it was a relief to light up a smoke and suck that poison into my lungs.

What's not to like? And what, as Carr asks, has the smoker to lose?

Nothing but the chains of addiction, of course; and if it doesn't work, one can just keep on smoking.

I said that all my previous attempts to quit have been hard, even agonizing. This time really was easy, which is why, only nine [edit: now 10] days after butting out, I feel almost completely confident — not confident that I have "quit smoking", but confident that I am once again, for the first time in more than 25 years, a non-smoker.

The difference between a quitter and a non-smoker to my mind (to my mind now; I'm cribbing from Carr) is that the former feels as if he or she has given up smoking, that they have made some kind of sacrifice, whereas the latter (finally!) understands that he has lost nothing but his chains, that she has lost only her servitude to a drug addiction.

And smoking is a drug addiction, not a "habit" or a "choice" or anything other excuse or lie used to justify it.

But if (I hear you cry) smoking is an addiction, how can it possibly be easy to stop?

Simply put, because it's not a very serious addiction. After three days, all the nicotine is gone from the former smoker's body (half is gone within hours, which means every smoker sleeps through the worst of his or her withdrawal symptoms just about every night of their life. An addiction to nicotine is not remotely as serious as alcoholism or heroin addiction!) and, in the interim, the physical withdrawal symptoms are, in truth, very similar to the feeling one gets when one is begining to get hungry, nothing more. As Carr points out repeatedly, every smoker goes many hours at a time in "withdrawal" from nicotine day in and day out, if only while asleep. And usually doesn't even notice the craving.

Nevertheless, how does it work? Why did Carr's method enable me to quit when neither will-power, nicotine patches or nicotine gum have been of any use to me?

I think the answer lies in Carr's use of the repetition I mentioned above, of which the book contains a great deal, sometimes almost word-for-word. The effect is almost hypnotic as he repeatedly reminds us of things were already know in the abstract.

Things like it's not actually fun to hang around outside at minus-30 degrees in a howling snow-storm in order to have a smoke; nor is it a genuine pleasure to interrupt a date in order to grab a butt. Things like the fact cigarettes actually taste awful (and I am someone who, even two weeks ago, claimed that I "enjoyed" the process of smoking. I now know I was lying to myself).

Allen Carr's Easy Way to Stop Smoking doesn't lecture, doesn't hector and doesn't try to scare you with horror stories about lung cancer or rotting gums. It just calmly and quietly reminds the smoker that he or she is addicted to a drug, that he or she doesn't enjoy smoking (it must be the only addictive drug that doesn't get its users high), and that their lives would be much better off without the addiction.

And after 186 pages, this former smoker is convinced that he will never light up again.

If you're a smoker, gamble the 20 bucks on a copy of the book — that's about two large packs of cigarettes. If you have a loved one who is a smoker, buy a copy, read it yourself, then pass it on to them — there's hardly a smoker alive who doesn't (if only secretly) want to stop.

Just this once, something that sounds too good to be true actually is true: if you know what you're doing, it's easy to become the non-smoker you once were.

This essay originally appeared in the October 16, 2009, edition of True North Perspective.