Renaissance genius meets the distant future —
But is the author's heart in his own conceit? 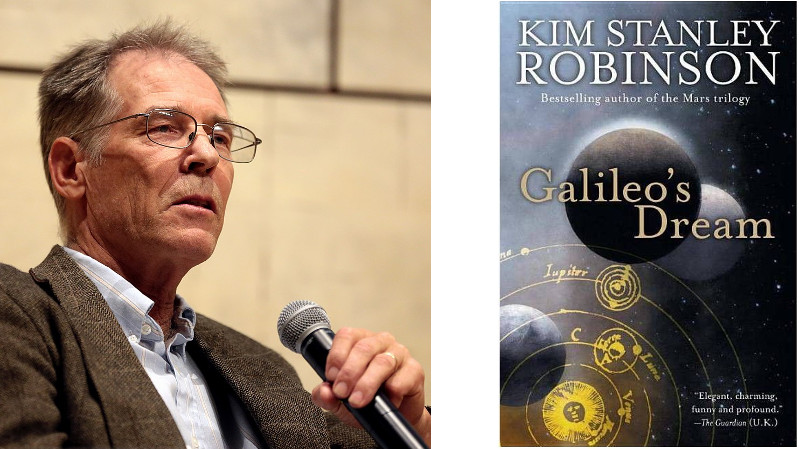 "If I have seen less far than others," Galileo complained in irritation to Aurora, "it is because I was standing on the shoulders of dwarfs." — Galileo Galilei explains his limitations in Galileo's Dream.

Is Kim Stanley Robinson getting tired of science fiction?

In the five novels since the final book in his already-classic Mars trilogy was published in 1996 and the North American release of Galileo's Dream just after Christmas, Robinson sojourned in alternate history with the excellent stand-alone novel, The Years of Rice and Salt and the very near future, with the not-entirely-successful "Science in the Capital" series; not quite abandoning the field, but staying on its peripheries.

Although his newest novel is an unabashed return to centre of science fiction, that the historical sections of Galileo's Dream are both more convincing and more interesting than those set in the 31st century, suggests that return is premature.

The novel opens in the late 16th century when a professor of mathematics at the University of Padua — as you may have guessed, none other than Galileo Galilei himself — is approached by a mysterious stranger who (I give away nothing that isn't on the dust-jacket) is a visitor from the far future. The stranger tells Galileo of a remarkable Dutch invention, a device which magnifies objects seen from a distance — a telescope, of course.

Intrigued, Galileo returns home to attack the problem and, in so doing, begins the process of invention and discovery that will lead to his eternal fame and to his eventual disastrous run-in with the dreaded Inquisition of the Roman Catholic Church.

Robinson is probably the best writer there is when it comes to dramatizing not just the discoveries of science but the processes by which those discoveries are made. The sections which focus on Galileo the scientist are fascinating and brilliantly alive. And he proves he is just as good at historical fiction, clearly and engagingly showing us the intricate politics of late-Renaissance Italy.

It is the conflict between science and religion, faith and empiricism, which is at the heart of the novel and that, perhaps, is why those sections set in the future don't fully succeed.

The first chapters introduce us to the brilliant scientist, the struggling entrepreneur and the crawling courtier that was Galileo Galilei. Robinson's portrait of history's "first scientist" shows us a man of creative genius and fertile imagination, with ego and temper to match; a social climber; a bully; a loving father; and much more — in short, a complicated and compelling protagonist, if not the ideal drinking companion.

The Renaissance politics — conflicts between Catholic and Protestant, Roman Church and nominally Catholic secular rulers, between movements within the Catholic Church itself — are just as skillfully worked into the story as the title character himself. If Galileo's Dream was "only" a historical novel, Robinson might have had another classic on his hands; unfortunately, the science fiction gets in the way.

The Mysterious Stranger doesn't just appear once, but again and again. And again and again, Galileo journeys into the future, to the year 3020, where a major discovery has been made among the moons of Jupiter.

The big idea behind Galileo's Dream is the belief by some in the future that history "went wrong" when Galileo was not burned at the stake by the Roman Inquisition; that the martyrdom of the "first scientist" at the hands of the Church would have so damaged the reputation of Religion itself that all of history would have been different — and possibly better.

Would religion have suffered a crippling blow to its credibility and prestige in the western world had the Catholic Church put Galileo to death? Would that have led to a better, more peaceful and more rational history following his death than the one we have known — and the worse things Robinson implies are ahead of us?

These are the larger issues Robinson explores through the repeated visits of our protagonist into the (or rather, into a) future, where he is exposed to ideas both scientific and sociological that must obviously shock a man from 16th century Europe. That Robinson manages to convince the reader that Galileo was of a strong enough character to not only deal with such shocks to his world-view, but even to (partially) integrate them, is a tribute to his characterization of this historical figure.

My suspension of disbelief trembled at times, but never crumbled.

My interest, however, was never fully-engaged by Robinson's 31st century society, nor by his cosmic speculations or by the possible alien intelligence lurking beneath the ice of Europa. The future in Galileo Dreams is like a charcoal sketch beside the lush oils of the past.

His 31st century is strange, but not that strange; his exploration of the the multiverse and of the ramifications of time-travel in a universe in which linear time itself is an illusion is likely to be unfamiliar only in the details to regular readers of science fiction, never mind to those who keep up even casually with the latest cosmological theories.

I was left with the feeling that Robinson realized part-way through his story that he had become more interested in history and biography of protagonist than he was in his cosmological and sociological speculations about the future.

This is not to say I didn't enjoy the book. I did. I may even read it again one of these days. But if I were able to travel back in time, I would opt to wait for the paperback.

I am a little over half way through, and started looking on the net for the point of this book; not sure if I plan to continue it. for alternate history/time travel/famous people books, it seems Orson Scott Card's Pastwatch does the job respectably.

So is there a point to this book?

DV, I'm honestly not quite sure what to make of your question (also, I haven't read the novel since my initial post). Unless you're talking about some kind of didactic "message" novel, is there a point to any book?

Galileo's Dream doesn't have a moral or some point like that, I don't think, but it does tell a story with a beginning, a middle and an end. By that criteria, yes there's a point and I certainly enjoyed the journey enough to finish reading to the end, despite my cavils.

But if you're not enjoying it half-way through, I don't think you'll start to like it now.

"I would opt to wait for the paperback," and the equivalent, "I can wait to see it when it comes out on video" means to me that a B- just ain't good enough.