In 1988 I was living with three friends in the east end of Montreal. Along with two of them, I was working hard to become a writer. One night after I had finished a short story, I took a walk with those two and found myself listening to them discuss my story as if it were a great work of literature. Vern and John talked about such things as the symbolism of two trees which featured prominently in the story, and I found myself nodding in agreement with their analyses. Much, if not all, of what they were saying sounded so plausible, despite the fact that I knew I had intended no such symbolism while I was writing.

For that reason, among others, I have shied away from making statements about symbolism and metaphor when critiquing or reviewing. Two often, it seems to me, that sort of thing amounts to just-so stories that might or might not have anything to do with an author's actual intentions. I prefer to concentrate on the craft of storytelling, examining books I've enjoyed (or not) and exploring what it was about story and character that, pace Tolkien, held my attention, amused, delighted, excited or deeply moved me. 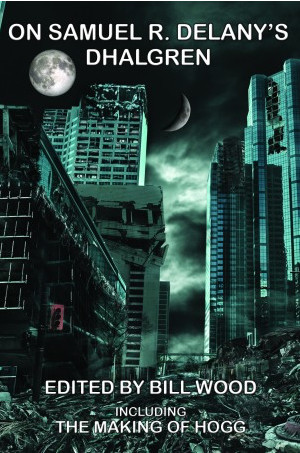 On those grounds, editor Bill Wood's anthology of reviews and essays, On Samuel R. Delany's Dhalgren is not the book I had hoped it might be, but I suspect that, at least to some extent, the book that Delany hoped it would be, if only because two of his own essays (one under his name, another under the nom de plume of K. Leslie Steiner) delve quite deeply, not just into Dhalgren's thematic and structural intricacies, but its literary antecedents and its symbolism and metaphors as well.

That said, I suspect that Delany — a very serious writer of fiction, but also for many years an academic — might wish that his own essays are not the most interesting and insightful pieces in this collection. The fact of the matter is, Dhalgren is a long book and a complicated one; it was published as (and is) science fiction; and even 45 year after its publication, science fiction simply doesn't get much serious critical attention.

Maybe this is a good time to say something about Dhalgren itself, for those of you who wander what in the world I'm talking about.

Published in 1975, Dhalgren is a nearly-900 page novel that seems to be circular — its final, broken sentence almost leads into its opening, broken sentence — and features as its protagonist a half-(Native American) Indian, half white protagonist with a history of mental illness who doesn't remember his own name. The Kid/Kidd/Kid, as he is called at various points in the novel, enters the mysterious post-apocalyptic Middle American city of Bellona, a place where some kind of disaster has driven all but a thousand or so of its citizens away. He encounters a wide assortment of misfits and eccentrics, has a lot of conversations and has sometimes very graphic sex with some of those he talks with. And the end, he leaves, and the reader is free to join two halves of an apparent circle and start again.

That might or might not sound intriguing to you, but to try to write a quick synopsis of a novel without, in fact, any traditional plot at all, is a fool's errand. Suffice it to say that Dhalgren is a novel I have found endlessly fascinating, tremendously real despite its impossibility, and sometimes laugh-out-loud funny, which is something I don't think any of the reviews and essays in Bill Wood's book mention.

And that lack, perhaps, helps to explain why it is that On Samuel R. Delany's Dhalgren left me with the sense that I am not the sort of reader Delany expected to have much interest in his long and structurally complicated novel. Though I have literally lost count of the number of times I've read Dhalgren, I keep returning to it and, as with a favourite place in the real world, I find something new with every visit. As with Tolkien's Middle Earth, Dhalgren's city of Bellona is a place to which I have felt almost compelled to return year after year after year.

All that said, there is considerable variety in this 267 page volume, and if Dhalgren is a novel that means something to you, On Samuel R. Delany's Dhalgren is a must-read.

The first section of contemporary reviews is about what one would expect for a paperback original published in 1975: only seven short pieces, the highlights of which include Steven Paley's, written as a pastiche of the novel's newspaper, The Bellona Times and, for comic relief, Harlan Ellison's remarkably obtuse (but very well-written) diatribe from the Los Angeles Times, in which he confesses to having given up on the novel on page 361. Theodore Sturgeon's laudatory, but all-too-brief review from Galaxy mostly begs for a much longer analysis, but only Douglas Barbour's "The Autumnal City" comes close to providing it. Also for comic relief, but in a much different key from the Ellison, is Darrell Schweitzer's, "A Response to Myself," written in 2020 as a rebuttal to his own review written in 1975.

A second, even shorter section includes two respectful reviews in response to the Wesleyan University Press' trade paperback reissue of the novel, positive but not especially insightful.

The third section, "Delany on Dhalgren" is the most interesting, no matter that one might expect a writer writing about his own work to be fraught with the risk of intellectual onanism.

What we get instead is a serious writer reflecting seriously on his own work. Delany does so both under his own name, and as K. Leslie Steiner in a 50 page (self) analysis that is without a doubt the high point of the collection. Steiner/Delany starts by pointing out that, despite its reputation, sex scenes take up a very small percentage of the novel — 35 pages out of nearly 900 — but spends the bulk of the essay discussing Dhalgren's structure, symbolic and mythological allusions and its literary influences. (Yes, Jane Austen and Cervantes among them, not to mention Gertrude Stein and, of course (if you're familiar with Delany's work), Jacques Lacan.)

If ever a reader wanted to know what the author meant, "Some Remarks Toward a Reading of Dhalgren" is a masterclass in how to do it right.

Being tone deaf to poetry more often than not, I'll pass by John Ashbery's "The Instruction Manual" without comment except to note that it is there.

The penultimate section, Critical Reactions, includes the kind of academic analysis that doesn't usually interest me, and opens with a poor stereotype of the form, Steven Shaviro's brief essay, "Amnesia", which concludes that, "Dhalgren is a huge, beautiful paean to wasting time." Er, thanks for that, Professor Shaviro.

Jean Mark Gawron's "An 'Introduction'", from the 1977 Gregg Press edition, on the other hand, is a long and meaty essay of the type one tends to find at the beginning of 19th century classics (which think should always be placed after the work in question, though Dhalgren is a novel that is harder to "spoil" for first time readers than most. Gawron suggests that Delany inserted himself into the novel, as a chain in Delany's long-standing interest in art as reflection of reality, and reality's reflections of art.

Mary Kay Bray's "Rites of Reversal: Double Consciousness in Delany's Dhalgren" looks at the fact that Delany is black as a starting point to examine Dhalgren against archetypal American novels, including Huckleberry Finn, Billy Budd, The Great Gatsby and even Catch-22, as heroes' journeys. Unsurprisingly, Bray finds Kidd's progress (or "progress") to be an ironic reversal of classic tropes.

Kenneth R. James' "Subverted Equations: G. Spencer Brown's Laws of Form and Samuel R. Delany's Analytics of Attention," very much lives up to its title. It is a dense essay which examines Delany's use of Brown's Laws of Form, a mathematical treatise that, if I understand the gist correctly, Delany disagreed with but found interesting enough to grapple with in fiction. James spends more Delany's brilliant fantasy tetralogy, Flight From Nevèrÿon, than on Dhalgren itself, discussing that series' use of inversions and deconstructions of ideas. It's an interesting essay but I fear much of it went over my head.

The book's final piece is an interview with Delany, not about Dhalgren, but about his pornographic novel Hogg, which was written concurrently with Dhalgren, but not published until nearly 20 years later. I have yet to get through Hogg, but even without it, the interview is an extremely interesting look at the creative process of a very deliberate artist.

As I mentioned above, one thing On Samuel R. Delany's Dhalgren will not give you is any sense of just how funny the novel can be (indeed, Delany's fiction — again, like Tolkien's — almost always includes humour. Not slapstick or situational humour, but usually character-based bits of dialogue that work in the same way your friend saying something unexpectedly funny at a party can. Neither do any of the essays examine how fully-developed, how real, its characters are. Delany might have been working on Dhalgren as a formal experiment in fiction, but he never neglected what is, to my mind, a writer's primary duty: to tell a story that, yes, will delight, amuse and sometimes deeply move a reader. Delany's fiction always works on multiple levels, but never skimps on story.

This isn't the volume of essays I wanted it to be, but it is precisely what the title promises: a collection of writing about a novel which I believe will continue to stand the test of time as a book that readers want to enjoy. If it does not cover everything I wish it did, what it does cover it covers quite well — perhaps in another five, or 10, or 20 years, Bill Wood will have sufficient material at hand to release a revised and much expanded version of it. I hope so, anyway.

Or maybe, if I hope to ever read the kind of essay about Dhalgren I missed in this book, I'll need to write it myself.